Initiated, curated, and artistically directed by Sophie Willison, terra firma magazine is a charming independent publication dedicated to photography and design. The project was born with a vision for ingenuity and impact, and the annually printed issues are uniquely planned and produced, each bearing its own experimental theme and are presented in a custom format.

In the first issue, Willison redefined photography by working with professionals who are not related to the practice, such as a teacher or doctor. A number of people were lent a camera and a few film rolls to take raw, spontaneous shots that were later edited and arranged in the final magazine. The second issue puts originality as the centre of its theme, suggesting an attitude to think and produce individually. This review will focus on the third and latest issue, and details regarding previous and upcoming releases could be surveyed through its website. 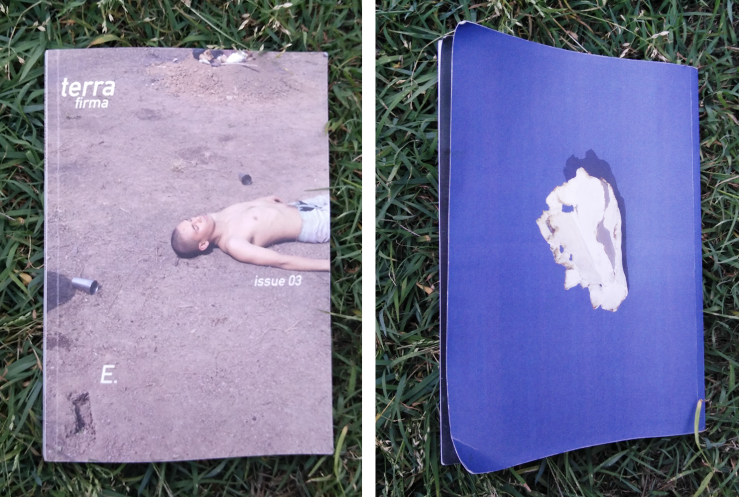 The latest issue, published this year, explores the theme of Energy. The magazine starts with a mystical glimpse sliced from the journal of Joseph Kadow, as he connects with nature and its elements during a Temazcal ceremony in Colombia. It is this experience that makes the front cover, with only the theme’s initial, E., as a hint. Without rushing, terra firma starts with the fundamental definitions of Energy as coined in English Oxford Dictionary, then advances to more contemplative inquiries. In his writing The Art of Energetics, B. Bisaillon evaluates the concept of universal energy as a creative force, and its relationship to the artist, particularly himself, as a creature who creates, which leads to art as the most sophisticated embodiment of energy.

terra firma proceeds, then, with visual interpretations of the theme by over forty artists including Willison herself. Nora Lowinsky explores the multifaceted feminine energy in her subjects; Robert Ducrow and Emilia Cocking attribute to office spaces as the infrastructure for productivity, where time and energy are most commonly spent on; and Yağmur Özdemir captures from the world of physics engineering, surreal imageries of living energy as processed by machines.

A brief profile marks the halfway point of the magazine. Texas-born artist Chris Williams describes his work philosophy in taking photographs, to capture and document the energy of the setting while maintaining an honest attitude to establish emotional and personal engagement through his images. The characteristics in Williams’ works stem from his background and point of view as an experienced painter, offering a unique and soulful perspective in photography.

As a cohesive part among an array of visual presentations in the book, Willison unexpectedly, yet pleasantly includes her conversation with Laurie Trueman and Lauren Stephen. At first glance, the two spreads of dialogue look like a weighty interview, but it is actually a refreshing discussion about personal passion and communal encouragement to achieve, presented in a manner that is light and relatable to read.

“What’s your dream job? What’s it like living in between places?”

The narration continues to encompass energy, induced with cultural philosophies and integrated to nature in the works of Camila Montoya and Charlotte Cornato. Then it manifests in the intangible forms of memory, feeling, and candid connection between people, places, and time in rapid succession of various works. It briefly pauses, in the pictures by Kirsty Harris, as a force of nature manipulated to turn against itself in favour of human domination

terra firma concludes with a spread of palm evergreens, and a figure clutching his heart. It embarks on an investigation to the abstract and mysterious nature of energy, drawing from the universally accepted understanding, to specific inquiries and, without denying its complexity, deduce its existence to that of nature, and an individual. The selection of works and textual pauses are laid out thoughtfully in the print, delivering a sound and poetic narration in a controlled tempo. Finalising side by side with Kadow’s meditation, is Ceramics by Minh Singer on the back cover, being a piece of material processed through unifying the four elements of nature.